KöR Whitening is the first company to cold pack their products, constantly refrigerating a full line of teeth whitening products from the moment of manufacture, until you receive them.

Why cold packing? With KöR Whitening systems you get exceptionally effective gels with lower sensitivity and less risk of pain. When KöR gels (with no chemical stabilizers) are placed onto the warm teeth, they break down with extraordinary effectiveness.

That perfect job interview, a storybook wedding, spacial time in your life when you want the memories to be perfect.  Patients often have a specific reason for whitening their teeth, but then discover how easy and effective it is for on-going whitening. The KoR Whitening system has a proprietary Dual-Activated, Tri-Barrel Hydremide Peroxide formulation and delivery system. And why we insist on continuous refrigeration of our whitening gels from the moment of manufacture until they arrive at the dental office.

Without Lights and Lasers

Our patients typically have previous experience with home-based teeth whitening systems, having tried the trendy bleaching lights and lasers. Like many others, they have found out that they just don’t work as advertised. Dental office whitening is the only means to truly white teeth.

That’s why KoR developed the proprietary KöR Dual-Activated, Tri-Barrel™ Hydremide® Peroxide formulation and delivery system, delivering phenomenal teeth whitening results – without lights or lasers. Let us show you how effective this tool is.

How Does KöR Work?

But you’ve probably experienced a gap between what’s promised and what’s delivered. Most dentists providing teeth whitening have been frustrated with a lack of predictability, effectiveness, and longevity of effect, as well as complaints of sensitivity by patients.

Intrinsic tooth color is a result of large natural pigment and stain molecules trapped within the microstructure of teeth. The larger these molecules are, the more chromophores they contain, and the darker the teeth appear.

All peroxide gels work by forming hydrogen peroxide as their end product. Hydrogen peroxide breaks down to water, oxygen, and numerous radicals and byproducts known as “bleaching factors” that lighten teeth.”

“Optimum whitening results are achieved only when these whitening gels are: fully potent; chemically influenced to produce a high percentage of free radicals (instead of simply oxygen and water); and are allowed extended time for these factors to diffuse thoroughly into the microstructure of teeth.

Clinical Research Associates (CRA) as well as other researchers have found that whitening gel in conventional whitening trays is only strongly active for 25-35 minutes. This is due to rapid contamination of the whitening gel by saliva.

Both saliva and sulcular fluid contain an abundance of the anti-oxidant enzyme peroxidase. When filling a set of upper and lower whitening trays with whitening gel, approximately 6.5mg of peroxide is placed in the trays. Saliva is capable of destroying a full 29mg of peroxide per minute! It takes very little contamination of the whitening gel in the trays by saliva to destroy whitening gel on contact.

KöR whitening KöR-Seal™ trays are specifically designed to seal both saliva and sulcular fluid out of the whitening trays. These trays, in combination with KöR whitening gels provide 6 to 10 hours of whitening activity compared to the typical 25-35 minutes of other systems. 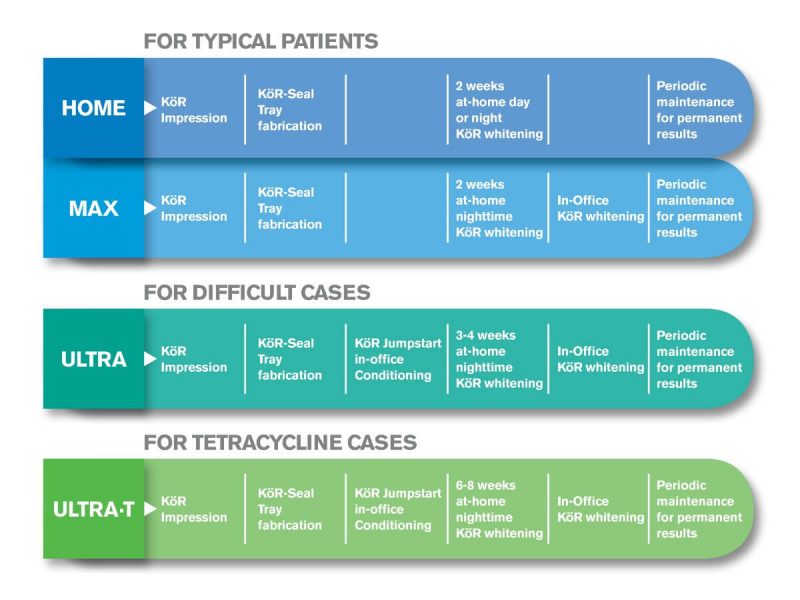 A patient-pleasing at-home whitening system that consistently yields amazing results at a great price. The KöR Home Whitening System is available for nighttime whitening as well as daytime whitening.

KöR-Night™
Nighttime whitening is always more effective than daytime whitening. This option provides a great whitening result for the typical patient at the lowest cost.

KöR-Day™
This daytime at-home whitening system is for those patients who prefer not to wear, or are unable to wear KöR-Seal Whitening Trays during sleep. KöR-Day may also be used for the super-sensitive patient who can only tolerate wearing whitening trays for very short periods.

Treatment: 2 or more weeks of at-home daytime whitening once or twice a day with KöR-Day 9% hydrogen peroxide; and periodic at-home maintenance.

Our best selling system, KöR MAX is a versatile and super-effective whitening system that combines at-home whitening with a single in-office whitening visit. This option provides the very best possible whitening result for the typical patient.

The KöR ULTRA-T Whitening System is specifically developed to deliver truly exceptional results on cases of tetracycline staining that were once thought to be untreatable.

This option may be used for patients who object to wearing whitening trays at home; however they should
understand that whitening results of any in-office-only power whitening system are more unpredictable than
other options and may need to be repeated in the future to maintain whiteness.

“A Few Things You Should Know About KöR Whitening.”

How does your unique continuous refrigeration process help?

KöR is the first in the world to refrigerate an entire line of teeth whitening gels from the instant of manufacture until received by the dental practice.

Whitening gels are very unstable chemicals — they’re supposed to be. That is why these gels are able to quickly liberate oxygen, oxygen ions and radicals when placed in the mouth. However there is a downside to this chemical instability. At room temperature and above, whitening gels will immediately start to degenerate upon manufacture. At room temperature, this degradation is a slow, constant process; however exposure to a higher heat in warehouse storage or during slow freight truck shipping from factory to whitening product company will degrade the gels much more quickly. Constant refrigeration virtually stops this degradation.

For the first time EVER, you will receive a full line of refrigerated whitening gels at virtually 100% of the effectiveness as the day they were manufactured.

How does the KöR Whitening System combat the sensitivity issue?

Our desensitizing method includes desensitizers that plug the orifices of dentinal tubules during whitening to “prevent” sensitivity, rather than simply attempting to treat the symptoms. The “Hydrodynamic Mechanism” theory of tooth sensitivity states that movement of the fluid within dentinal tubules is responsible for mechanically activating the nerves at the periphery of the pulp, causing a painful reaction. When the natural smear plugs are lost from the orifices of dentinal tubules, fluid within the tubules can move thirty-two times more freely, causing dentinal hypersensitivity.

The oxygenation process during whitening not only deeply cleanses the tooth, but also actively displaces the plugs in dentinal tubules, leaving the tubular fluid susceptible to flow. The whitening chemicals create an osmotic gradient in fluid flow within the dentinal tubules outward from the pulp. The result is typical whitening sensitivity, which can sometimes be very acute.

Potassium nitrate, often recommended for treatment of sensitivity, does not plug tubules. In some patients it partially reduces the ability of the pulpal nerves to fire. This affect does not eliminate the pulpal inflammation, and only partially masks the symptoms. Some claim ACP will block dentinal tubules, however ACP has been primarily developed and studied in relation to repairing highly inorganic enamel, not the more organic dentin. Even if ACP were to cause mineral formation within dentin, which is much more organic in nature than enamel, it would do so by slowly “growing” tooth structure instead of actively and rapidly “plugging” tubules.

How is it possible to get consistent whitening results every time?

With our revolutionary KöR-Seal™ Trays, and specially formulated KöR Whitening gels, we are able to achieve 6+ hours of active whitening instead of the common 25-35 minutes.

This will condition every patient’s teeth so that they become permeable to bleaching factors (whitening byproducts of peroxide). The more conditioned and permeable teeth are to bleaching factors, the better they whiten. We have several years of research behind us, and the developer, Dr. Rod Kurthy, has personally seen the system through development and clinical testing every step of the way.

When followed appropriately, KöR Whitening training material and videos ensures “get it right” accuracy. Add to all of this our unique refrigeration process, not to mention the thousands of dental professionals who are singing the praises of KöR’s reliability, our satisfaction guarantee, and you have every confidence that you’ll get it right all the time.

Is the full KöR Whitening system necessary to make it work?

Yes. Following the complete recommended system, in accordance with our training manual, is the only way to achieve whitening results that will fully satisfy you and your patients. As long as all steps are followed you will get a fabulous result every time.

No matter how small a step is, not following it may result in unsatisfactory results. The results of KöR Whitening are not due to a single “magic bullet,” but rather a complete series of technique steps that together with ideally-matched products, result in the amazing whiteness your patients expect.

Is 'regression' normal after whitening?

Patients should understand there will routinely be some amount of regression after the whitening process. Technically, that regression is more accurately described as the color “normalizing” so that the teeth appear more natural.

Immediately after the active phase of KöR Whitening, and after any in-office whitening visit, patients will usually have a few nights of at-home whitening gel left. The patient should continue whitening every night until the whitening gel is gone. After this, or after Accelerated Maintenance, all patients should be directed to wear their KöR-Seal Trays, with whitening gel, a minimum of one night per month indefinitely.

If you have a particularly resistant patient, or someone who has teeth that absorb stain very quickly, or a patient who constantly consumes the most staining beverages possible, you may need to recommend a twice monthly Long-Term Maintenance program. In rare, very difficult cases, the patient may even require more than twice monthly maintenance. When patients need more frequent maintenance, daytime maintenance with KöR-Day also works well.

What is a KöR Accelerated Maintenance program?

In very severe cases, such as a difficult tetracycline stained case, you might start out at 5 nights a week, while
others you may start out with only two nights per week. This will depend on the particular case, the enthusiasm of
the patient, the expectations of the patient, your experience, etc.

After Accelerated Maintenance, the color is as set as it will ever be, and patients continue with a standard Long-
Term Maintenance protocol.

Have any questions or want any insight on what differentiates us from other Lafayette dentists?

Give us a call and book an appointment today